Although  is an English word, it is fast becoming popular in the Hindi vocabulary too. Yoga and Ayurveda term it as ‘basti kriya’, or ‘doosh’, as other experts call it. Taking enema is simply the insertion of a thin tube into the anus to draw out toxic waste matter from the large intestine using water, edible oil, dilute curd and so on. The cause of all diseases lies in the waste matter that collects within the intestines. Performing regular enema is a sure-shot way of getting rid of that waste as the body gradually gets purified and disease-causing symptoms to fade or completely disappear. In fact, one should keep an enema set handy at home for use as and when required.

At the mention of the word ‘enema’, most people cringe and mistake it to be the one given in hospitals, the one that inserts chemical-based soap liquid in the intestine to clean it. The truth is that it is a very harmful practice because when we cannot tolerate soap residue on our skin, how can we allow its entry into our internal organs? The harsh caustic content of soap tends to shock the inner intestinal membrane so this kind of hospital-variety enema should be avoided at all costs. The kind of enema we are talking about is the one that uses edible liquids that can be used through an enema set in the comfort of home. These liquids are soft in texture and neither excite nor hurt the intestine, on the contrary, they gently cleanse it. The process is as safe as rinsing one’s mouth with water in the morning.

However, there are less knowledgeable or misinformed people who spread fear of enema in the minds of people, sometimes even blaming it for their ill- health. This is obviously far from the truth.

Enema as a family doctor

Investing about Rs. 100 in an enema set can be compared to bringing an ever-ready doctor home. Whenever anyone feels unwell in the family, enema should be taken immediately for relief and often, for full cure. As a result of enema, all the intestinal waste matter that would have otherwise rotted lying inside, slowly making the blood increasingly acidic, gets an easy outlet. Therefore, taking an enema is highly recommended especially when a person is in the initial stages of sickness. To emphasize the usefulness of taking an enema, let us consider the example of American doctors who researched the intestines of dead patients. Of the total 284 bodies examined, 256 had solid waste stuck in layers in their intestines. Some even had worms that had made holes in the intestinal lining. Due to the accumulation of excessive waste matter, intestines of few patients had become double in size. Sharp knives had to be used to forcefully cut them open for examination. Most of these patients had a daily bowel movement but still retained so much toxic matter that finally led to their premature death due to one disease or another. Had they kept their intestines in shape in a more rigorous way, they could have made their lives longer and healthier. 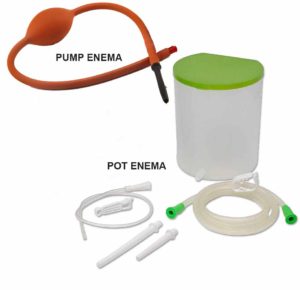 Pot enema: This enema set contains a pot with a tap on one end. It has to be hung at a height of about three feet from the ground and filled with liquid in the quantity required. A catheter is attached to the tap and is inserted in the anus during taking an enema. When the person is not able to hold the liquid inside any longer, the catheter is gently removed and the concerned person can defecate.

Pump enema: This enema is to be taken while in the toilet. The set has a pipe and a pump. The pipe has a non-returning valve on one end and a nozzle on the other. One has to dip the valve in about 250gm water and pump it till the nozzle starts spilling water. A catheter is attached to the nozzle and inserted in the anus. After a few minutes, the person can defecate. This process can be repeated again in case the need is felt. Both enema sets benefit equally. Pump enema can be utilized while traveling while pot enema can be used at home by hanging it at a convenient place for all family members to use. Each can use their own catheter while taking an enema in the latter case. Also, for patients who may find pumping action difficult, they can easily use pot enema.

Important points regarding enema
One can use an enema whenever the need is felt. In fact, if a person is not able to defecate twice on his own, then enema should be taken.
· Enema is of particular importance during fasting, especially when it is being
done on juice or water.
· Even a child of five-six months can be administered enema in case of indigestion, gas or constipation.
· Children who do not defecate normally in the morning should be given enema regularly for some days to regularize their bowel movement.
· Those with chronic constipation can pump some water in their intestine at night before sleeping. This would help bowel movement in the morning.
· Those with indigestion, acidity, constipation, gas, headache etc. can use an enema for relief.

Precautions:
· The pot should not be more than three feet in height while using pot enema.
· There should be no air in the pipe before using an enema.
· One should use plain water while administering enema unless otherwise advised by an expert.
· In case a person has the problem of blood in stool, he should oil the catheter
before insertion.
· Enema should not be used during pregnancy.
· In winters, taking warm water enema is good.

One should not force out water during defecation.
·It is not important that all the water comes out after taking enema. This can
be attributed to dryness of intestines. The water that stays inside would soften
the hard stool so should be allowed to stay there.
Important note: Taking regular enema will not prevent diseases by itself. As
prescribed by Manas Yog Sadhana, a supportive dietary system must be
incorporated in one’s lifestyle so that food does not rot in the intestines and
can be easily processed and passed out. In this regard, one should not eat
anything till noon, followed by consuming raw fruits and salads in the
afternoon and one cooked meal at night. This diet along with regular use of
enema will purify the intestines and reduce or fully eliminate chances of falling
sick.